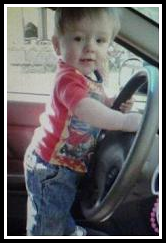 On September 2nd, 2011, Mary gathered up her three younger children (Charity, Joshua, and Bently) to walk them to the bus stop to pick up her eldest son, Jacob. Jacob had just started his first year of school.

When she got to the bus stop, she left the three younger children on the sidewalk with other children and parents then walked across the street to talk to the bus driver. The day before, Jacob had been dropped off at the wrong bus stop and Mary wanted to make sure that the bus driver knew where to let him off at. She was worried that something bad would happen to him if he continued to be dropped off at the wrong stop.

In the few seconds, that it took to walk across the street and start talking to the bus driver, another woman, who was picking up her own child from the same bus stop, drove her SUV around the stopped bus and ran over one year old Bently. Bently was rushed to the local hospital with life threatening injuries but was pronounced dead a short time later.

This website is a dedication to Bently Blake so that he will never be forgotten by those of us who loved him and miss his smiling face.

Spread forth hath Zion her hands, There is no comforter for her, Jehovah hath charged concerning Jacob, His neighbours `are' his adversaries, Jerusalem hath become impure among them.